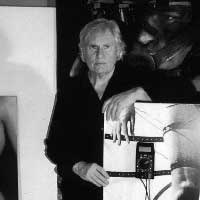 Born Lübeck, Germany 1935.
Studied at Hochschule der Künste Berlin, Germany. Teacher at the European Academy of Fine Arts Trier, Germany. 1955 Admitted to the Beaux-Arts de Berlin where he followed a course by Will Grohmann, friend of Paul Klee. He went to Hans Richter’s conferences (the protagonist of the Dada movement) and also those of Karl Schmidt-Rottluff (Head of the Die Brucke following). He met young artists including Georg Baselitz and the photographer Benjamin Katz. 1959 Assisted at the opening of the Documenta de Cassel and visited the exhibition dedicated to Wols (whom he discovered a few months before during an exhibition in Berlin). Then he moves to Paris; ‘Each day from 6pm to midnight, I went to the Cinémathèque on the rue d’Ulm to watch Fritz Lang and Murneau’s films.’ He also discovered the nouvelle vague française, the Italian neo-realists and the Shodox by John Cassavetes at the Biennale de Paris. 1961 First appearance of sections of women’s bodies in his painting. Lives and works in Paris.