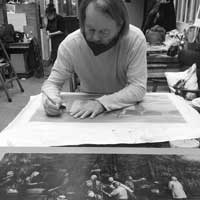 Danish painter and graphic artist. Debuted in 1972. Graduated from the Funen Academy of Fine Arts in 1977, studied with Dan Sterup-Hansen at the Royal Danish Academy of Fine Arts from 1982-1984. Stylistically, he belongs to neo-realism and often uses photos as a starting point for his paintings. Peter Martensen has portrayed the former Speakers of the Folketing, Erling Olsen and Christian Mejdahl. The portraits hang in the Folketing. Other works have been exhibited at e.g. Kastrupgårdsamlingen, Statens Museum for Kunst, Vejle Kunstmuseum and Victoria and Albert Museum in London.